What You Don't Know About Face Flushing From Alcohol That Could Kill You!

People whose faces turn red when they drink alcohol may be facing more than embarrassment. The flushing may indicate an increased risk for a deadly throat cancer,  researchers report. 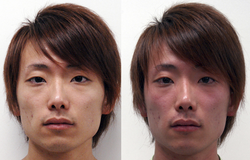 Facial flushing in a 22-year-old before (left) and after (right) drinking alcohol. Approximately 36% of East Asians (Japanese, Chinese, and Koreans) show a characteristic physiological response to drinking alcohol that includes facial flushing, nausea, and tachycardia. This so-called alcohol flushing response (also known as “Asian flush” or “Asian glow”) is predominantly due to an inherited deficiency in the enzyme aldehyde dehydrogenase 2 (ALDH2) [2]. Although clinicians and the East Asian public generally know about the alcohol flushing response, few are aware of the accumulating evidence that ALDH2-deficient individuals are at much higher risk of esophageal cancer (specifically squamous cell carcinoma) from alcohol consumption than individuals with fully active ALDH2. This is particularly unfortunate as esophageal cancer is one of the deadliest cancers worldwide, with five-year survival rates of 15.6% in the United States, 12.3% in Europe, and 31.6% in Japan [4]